President Trump sounds more like our Christian founding fathers, who made America great, as he spoke at the 2018 National Prayer Breakfast.

Across the country, Christians support the President in high numbers and are pleased with what he said.

The USA Is a Christian Nation

President Trump talking about God is one more proof the USA is a covenant Christian nation.

“Christians are thankful President Trump stands up for our Christian nation. All of America’s blessings come through Jesus Christ,” said Rev. Steven Andrew who leads One Million Americans on the LORD’S Side and daily prayer for a Christian government, from school boards to federal representatives.

“To make the USA safe and strong again, Christians are praying daily for Christians to replace all politicians disobeying God, and we have found God’s mercy to have President Trump stand up for our Christian nation,” he said.

President Trump Is A Great President

In contrast, Obama put Christians and America down. President Trump is known for standing up for America more than the Bush’s, Bill Clinton, Ford, Carter and Obama. FBI memos reveal that Obama is believed to have illegally spied on President Trump in the Democrats’ failed attempt to try to overthrow the USA.

“Christians believe President Trump is a huge improvement over Obama and others. Families and school children feel safe with President Trump, since he says we love God and the USA is One Nation Under God,” Andrew said.

President Trump acknowledged Jesus rules by quoting Isaiah 9:6 at Christmas and he often talks about the urgency to protect Christians’ rights to follow God. 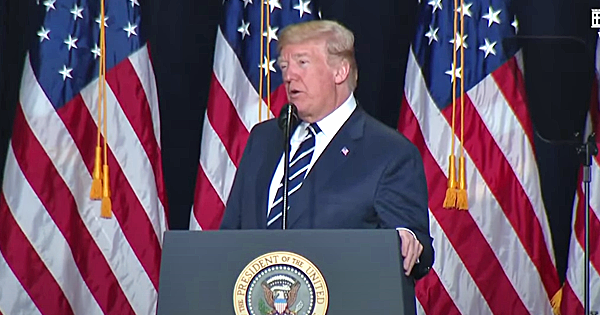 THE PRESIDENT: Thank you, Charlie. (Applause.) Thank you very much. And thank you, Randy, for that very kind introduction. I want to thank you and Congressman Charlie Crist for serving as co-chairs this year.

It’s an honor to be with so many faith leaders, members of Congress, and dignitaries from all around the world as we continue this extraordinary tradition. I’m very glad to be joined by many members of my Cabinet. You’re doing a terrific job.

I want to extend our appreciation to the First Lady of Rwanda for leading the opening prayer. Thank you. Thank you very much. (Applause.)

I also want to thank my two great friends, Mark Burnett and Roma Downey. They’re some here. Where are they? They are two terrific people. Stand up, Mark. You deserve it. Even though he comes from Hollywood. (Applause.) Roma, thank you very much. Thank you for being here.

Major Scotty Smiley and Tiffany, we’re moved by your faith and your courage, and inspired by your service and sacrifice. That was really beautiful. Thank you very much. Thank you. (Applause.)

And to my friend, and everybody’s friend, Steve Scalise, we are so glad to have you with us today. Your presence reminds us of Jesus’s words in the Book of Matthew: “With God all things are possible.” You are fantastic. You really are, Steve. (Applause.) Fantastic man.

America is a nation of believers, and together we are strengthened by the power of prayer. This morning, our hearts are full of gratitude as we come together for the 66th annual National Prayer Breakfast.

But our hearts are also saddened by the absence of the co-founder of this wonderful breakfast who passed away last year, Doug Coe, who everybody loved. (Applause.) For 60 years, Doug devoted his time and passion to this Prayer Breakfast and to many other wonderful causes. Today, we are blessed to be joined by Doug’s wife Jan, and two of their sons, David and Tim. (Applause.) Thank you. Thank you very much. Great man.

I want to thank you for carrying on Doug’s legacy also, and bringing our nation together in prayer. You are indeed carrying on his great legacy.

Each year, this event reminds us that faith is central to American life and to liberty. Our founders invoked our Creator four times in the Declaration of Independence. Our currency declares, “In God We Trust.” (Applause.) And we place our hands on our hearts as we recite the Pledge of Allegiance and proclaim we are “One Nation Under God.” (Applause.)

Our rights are not given to us by man; our rights come from our Creator. (Applause.) No matter what, no Earthly force can take those rights away. (Applause.) That is why the words “Praise be to God” are etched atop the Washington Monument, and those same words are etched into the hearts of our people.

So today, we praise God for how truly blessed we are to be American. (Applause.) Across our land, we see the splendor of God’s creation. Throughout our history, we see the story of God’s providence. And in every city and town, we see the Lord’s grace all around us, through a million acts of kindness, courage and generosity. We love God.

We see the Lord’s grace in the service members who risk their lives for our freedom. We see it in the teachers who work tirelessly for their students, and the police who sacrifice for our communities — and sacrifice they do. (Applause.)

And we see the Lord’s grace in the moms and dads who work two and three jobs to give their children the chance for a better and much more prosperous and happier life.

As the Bible tells us, for we are God’s handiwork, created in Jesus Christ to do good works. America’s heroes rise to this calling. In their selfless deeds, they reveal the beauty and goodness of the human soul.

When catastrophic hurricanes struck, first responders and everyday citizens dove into rushing waters to save stranded families from danger. And they saved them by the thousands. Neighbors opened their homes to those in need of food, clothes, shelter. Firefighters braved blinding smoke and flames to rescue children from devastating wildfires.

During the horrific shootings, strangers shielded strangers, and police officers ran into a hail of bullets to save the lives of their fellow Americans, right in Las Vegas. A terrible day, a terrible night. But such bravery.

Families have adopted babies orphaned by the opioid epidemic and given them loving homes. Communities and churches have reached out to those struggling with addiction, and shown them the path to a clean life, a good job, and a renewed sense of purpose.

All we have to do is open our eyes and look around us, and we can see God’s hand. In the courage of our fellow citizens, we see the power of God’s love at work in our souls, and the power of God’s will to answer all of our prayers.

When Americans are able to live by their convictions, to speak openly of their faith, and to teach their children what is right, our families thrive, our communities flourish, and our nation can achieve anything at all. (Applause.)

Together, as Americans, we are a tireless force for justice and for peace. We have witnessed this truth over the past year.

Today, the coalition to defeat ISIS has liberated almost 100 percent of the territory just recently held by these killers in Iraq and all throughout Syria. (Applause.)

Much work will always remain, but we will never rest until that job is completely done. And we are really doing it like never before. (Applause.)

We know that millions of people in Iran, Cuba, Venezuela, North Korea, and other countries suffer under repressive and brutal regimes. America stands with all people suffering oppression and religious persecution.

Last week, during the State of the Union, the world was inspired by the story of a North Korean defector, Mr. Ji Seong-ho, who is now back in South Korea.

Before his escape, when Seong-ho was being tortured by North Korean officials, there was one thing that kept him from losing hope: Over and over again, he recited the Lord’s Prayer. He prayed for peace, and he prayed for freedom. And now, as you know, Seong-ho is free and a symbol of hope to millions of people all around the world. (Applause.)

Here with us today is another symbol of hope, a very brave 9-year-old girl named Sophia Marie Campa Peters. Sophia suffers from a rare disease that has caused her to have many strokes. At one point, the doctors told Sophia that she would not be able to walk.

Sophia replied, “If you’re only going to talk about what I can’t do, then I don’t want to hear it — (laughter) — just let me try to walk.” (Applause.)

She tried, and she succeeded. And one of her doctors even told her mom — and they’re right here in the front row where they should be — “This little girl has God on her side.” (Applause.) Thank you, Sophia. Thank you, mom. Great mom.

Just two weeks ago, Sophia needed to have a very high-risk surgery. She decided to ask the whole world to pray for her, and she hoped to reach 10,000 people.

On January 24th, as Sophia went into surgery, she far surpassed her goal. Millions and millions of people lifted Sophia up in their prayers.

Today, we thank God that Sophia is with us, and she’s recovering, and she’s walking very well. (Applause.)

And I have to say this, Sophia: You may only be 9 years old, but you are already a hero to all of us in this room, and all over the world. Thank you, Sophia. (Applause).

Heroes like Sophia come from all across our country and from every different background. But they all share one thing in common: Through their love, their courage, their sacrifice, we glimpse the grace of almighty God.

So today, inspired by our fellow citizens, let us resolve to find the best within ourselves. Let us pray for that extra measure of strength and that extra measure of devotion. And let us seek to build a more just and peaceful world, where every child can grow up without violence, worship without fear, and reach their God-given potential.

As long as we are true to America’s founding and the example that all of these great founders have set, we can all be heroes to everybody, and they can be heroes to us.

As long as we open our eyes to God’s grace and open our hearts to God’s love, then America will forever be the land of the free, the home of the brave, and a light unto all nations. (Applause.)

Thank you for this incredible event and to our wonderful hosts. And thank you to all of our heroes for serving, protecting, and inspiring America each and every day.

God bless you, and God bless America. Thank you very much. Thank you. (Applause.)

Great Again: President Trump Stands for Our Christian Nation at National Prayer Breakfast added by Editor on February 9, 2018
View all posts by Editor →

One Response to "Great Again: President Trump Stands for Our Christian Nation at National Prayer Breakfast"